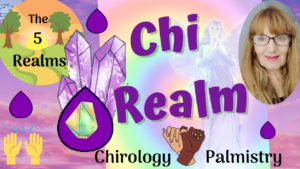 “The eternal is your origin, your home and your destiny.”  Eckhart Tolle.

The Chi Realm of the 5 Realm system of Counselling and Coaching with Chirology symbolizes our religious and spiritual lives. In this realm of the unseen, we honour people’s religious allegiances, affiliations and beliefs, and their spiritual identity.

Many a time I meet with clients who have impeccable faith in the God of their understanding, who perhaps use meditation and prayer, and who are grounded in their spirituality. Many others have no sense of lack or deficit in this area of their life, or they may be atheist or agnostic.

But for some, inquiry into their religious and spiritual life reveals an emptiness. I’ve met with those who were brought up without any religious affiliation or identity, which in itself might leave a person alone, spiritually adrift with a sense of un-belonging, without any sense of communion with a Higher Power.

I’ve met with more than a few clients who were exposed to double standards in childhood, leaving them angry and resentful towards God. Several grew up with a “religious” parent, a minister, who is a saint in the the community, but who is tyrannical, abusive and sexually immoral at home. The people feel wronged, angry, hurt and abandoned and are cynical and disillusioned with religion.

Another example of cause for rebellion against their religious upbringing is the child of a Jewish family, where permission to eat bacon is granted when on holiday, but non-kosher foods are forbidden at home. For a sensitive child, this is a bewildering double standard.

Others were forced to attend a prescribed place of worship but saw through hypocrisy, could not identify with their indoctrination, and for whatever reason are disillusioned with their Priest, Rabbi, Imam or Guru. Many are cynical about how money is expected from worshippers at religious institutions.

The Chi Realm also governs the arena of the occult. Here in South Africa, I occasionally have a client who are or have been bewitched by spells and black magic. Others ask about demonic possession. In these cases, my repertoire as a reader includes recommendations for banishing and protection rituals. Structured rituals are formulas which restore harmony.  Some leak psychically, are curious about soul fragmentation soul retrieval. Many are tormented by hungry ghosts.

Increasingly, people are curious about and feel an affiliation with their Higher Selves as faithful friends. Archangels and the angelic realm, spiritual guides and receiving messages from beyond the veil are chi governed themes that often arise in a hand reading consultation, where together we feel the presence and support of the person’s ancestors and departed loved ones.

Death and dying, bereavement, or the longing for death with completed or considered suicide are all counselling areas belonging to the realm of chi. In readings, the influences of past, parallel and future lives and their possible bleed-through into this lifetime often feature as themes to explore.

The realm of chi also governs our sixth sense, our intuitive and psychic awareness and perception, so alive and powerful for increasing numbers of people, who ask about aligning, listening and responding to their inner voice of knowing. Remote viewing, and how to cultivate psychic insight are common chi realm conversations in readings.

There are many palmar markers that might open the conversation into matters to do with people’s spiritual and religious life. Some of these include Rings of Solomon, the Mystic cross, the bow of intuition, the girdle of Venus, pointy fingertips, translucence on tops of hands, and others.

Thumb rings for example signal the longing in a person for spiritual comfort and support. In digit analysis within the 5 element system, our thumbs represent our spiritual identity. By adding weight to most evolved digit, we might be revealing depletion of independence, energy and will. Worn unconsciously, thumb rings might signal spiritual loneliness and disappointment. 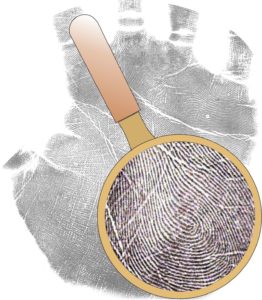 Memory loop dermatoglyphics are one of the markers in hands that aspect psychic ability. The water-governed, tear drop shaped glyph patterns lies like a pool upon water-governed Moon mounts; water is added to water, the water element is doubled. This activates sensitivity, imagination and intuition. The glyph activates awareness of non-material realms such as myth, mysticism and symbolism. (A mention that their short-term memory may be unreliable; the term “memory loop” refers to deeper, more occluded memories within the collective unconscious.

Influence or “sister” lines on Venus mounts inside earth (life) lines represent physical, emotional or spiritual support. These lines might be very faint. They may hang suspended without apparent starting points, or originate from or link in some way to the earth line and can be interpreted that the owner’s inner strength is sourced from non-material dimensions. Many people with influence lines are spiritually attuned, have unseen friends, and resonate with the angelic realms. In their lives, they may have been influenced by a spiritual teacher or guide.

Utilizing the 5 Realm Counselling and Coaching infrastructure takes palm reading to a new level. Readings are optimized when presented within the model., where each hand feature is governed by an element and is then interpreted according to principles that the element exhibits. The model holistically encompasses, defines, classifies and embraces specific component parts and clusters of all areas of human experience; physical, emotional, vocational/creative, mental and spiritual.