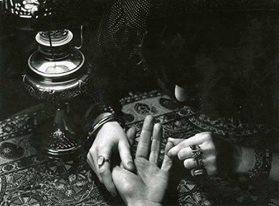 I call the system of five element chirology that I teach ‘the evolution of palmistry’. Chirology embraces Palmistry, in that traditional western Palmistry is a storehouse for research, and a treasure of hand reading know-how. Chirology is an umbrella term, meaning ‘knowledge of the hand’. Many of the palmistic interpretations are in fact coherent with the five element system of chirology. Chirology is very specifically a structured, empowering dialogue therapy, and a counselling tool. Palmistry, on the other hand, offers little in the way of psychological context. Palmistry lacks the system and the defined ethical considerations of five element chirology.

The predominant system of interpretation that we use in Chirology is that of the five elements, earth, water, fire, air and chi. Emphasis is on the fundamental scientific principles of the elements, and on how to define human traits in terms of elemental principles and characteristics. In chirology, we use ‘the language of the elements’ to codify and interpret the forms and markings of the hands. Chirology readings include conscious, energetically aware, sensitive and compassionate holding of people’s hands. Discussions are ‘now’ focused, qualitative and holistic, in current time, rather than chronologically structured. Traditional western Palmistry places more emphasis on past and future, and is often more divinatory and intuition based, whereas you don’t have to be especially psychic to excel in chirology.

Palmists might take a fatalistic approach, while in chirology we emphasise free will. Palmistry asks that we remember many hundreds of combinations of markings, mostly based on 7 celestial bodies, Sun, Moon, Jupiter, Venus, Mars, Mercury and Saturn, which are superimposed upon, or ascribed to, various areas of the palms. Some Palmistry systems also include the latter day planets, Uranus, Neptune and Pluto. In Palmistry, more emphasis is placed on the mounts, and in chirology, we pay close attention to the fingerprint glyphs.

With Palmistry being so strongly associated with unethical charlatanism, five element chirology is an exquisite bridge over the divide between divination and psychology.