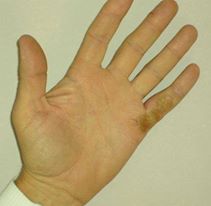 What might a chirologist ‘read into’ a damaged (baby) finger? The debate about do we or don’t we read meanings into scars i.e. ‘when is a cigar just a cigar’ will forever continue. Be that as it may, a scarred, burned, crushed, cut or otherwise schmangled pinkie does indeed offer a story about the owner’s formative and familial influences, and about certain of their character traits, blockages and beliefs.

Proportionately long and well formed air fingers often signal a verbally charming, seductively sexy, agile-minded communicator. Unfortunately the opposite traits might apply to a person with short little fingers. These might include their experiencing communication issues in relationships and business transactions, emotional immaturity, fear of speaking out and sexual self-doubt.

It can be argued then that damaged baby fingers reflect a ‘literal’ woundedness, or a ‘scar’ in the person’s experience of intimacy. Theirs will likely be a story of messed up communications, betrayals, abandonments, not feeling heard, and their having been impotent in the face of early trauma. Life’s experiences have rendered them acutely vulnerable in the areas of life most predominantly associated with air fingers, that of sexual development and confidence, and the ability to communicate clearly. Burns might even suggest the sense of the owner having gotten ‘burned’, while breaks show ‘brokenness’, or cuts and crushed fingers might suggest they have been ‘cut and crushed to the bone’. Consider too though that a person with a damaged or missing baby finger has ‘lost’ a potential opportunity. This might activate such a deep desire and motivation in them to convey a message, and to be heard, that they do become recognised for their talents.

If a person has a missing baby finger (or part of), traits of shyness, meekness, quietness, humility, flight not fight, childlike wonder and naiveté are highlighted. Positive traits also include a youthful enthusiasm and rapport with children. Less redeemed traits include the reluctance to self-inquire, in that they can’t or won’t expose themselves, a guile that can beguile, reactivity to minor irritations, sexual peculiarity and repression, and the tendency to withhold and detach.
When a client arrives with a missing pinkie tip, you might want to check with them if they were subjected to any form of ritual custom. Amongst certain Xhosa speaking tribes here in South Africa, in an excruciatingly painful tradition called ‘ingqithi’, the tip of the pinkie (or sometimes ring) finger of newborn or young child is amputated. It is believed that ingquithi ensures that the ancestors will recognise the child, as well as inhibit any mental disturbances and bed wetting. For older people suffering the consequences of not having had this gruesome mutilation in early life, the tearing off of the flesh, by a traditional surgeon, is an alternative to avoid the agony of cutting through the matured bone joint. The ritual is also prescribed to deter bad luck, to alleviate physical and psychological problems, or even to attract a partner.

Ritual amputation of fingers is also performed within some cultures as a way to physically feel the emotional grief and pain of losing a loved one. In the Dani tribe from Papua, Indonesia, finger phalanges (apparently mostly of women) are removed by close family members, perhaps a mother, father or sibling. It is reported that in a similar bizarre tribal practice, mothers bite off the tip of the little finger of their babies to increase their chances of survival.

And within a prominent criminal organisation in Japan, a finger shortening ritual, called yubitsume , is performed by means of amputating portions of one’s own little finger, as a way of atoning for offences, of being punished, or to show apology to another.
The psychological ramifications of finger mutilations within traditional and tribal cultures may be appropriate to the function of groups mentioned, but in chirology both the injury, and the type of injury, can be read as being clues about the person’s character.

Please refer back to BLOG for more about pinky fingers.