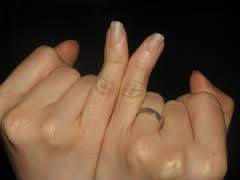 It’s our littlest finger, but in hand reading the air (baby) fingers offer the biggest story. Of our five digits, our pinkies have the most diverse array of associated meanings. This smallest digit governs communication, financial exchange, business acumen and sexuality. Some hand analysts also perceive the forms of baby fingers as being key to the person’s sense of self-worth. In medical research, the forms of the pinky finger are also associated with various mental and neurological disorders. Our air fingers are a vast topic. This is the first of a three part look at a few of the possible meanings of basic forms, markings, wounding, or loss of the pinkie finger.

Part One – Formations
In examining air fingers, chirologists observe their length, ‘set’ (i.e. the level at which the digit departs from the palm), relative sizes of each individual phalange (each has its own set of associations), knottiness, bends, leans, nails, glyph patterns, flexibility, tip shapes and relative thickness.

Ideally, our air fingers should reach to the inter-phalangeal crease between the tip and middle phalanges of our fire (ring) fingers. Long air fingers show creative thinking, friendliness, charm, persuasiveness and sexiness. Owners are articulate communicators. It is interesting to note that both very short and very long baby fingers are often observed in the hands of people diagnosed with schizophrenia. Truly short baby fingers are seldom found. The finger often appears short, but in fact is low-set. Anyone with a short pinkie is rather childlike and would probably exhibit some sort of communicative and/or sexual immaturity or repression. They would tend to internalize or be shy or unable to reveal their thoughts.

The ‘set’ of our pinky finger, that is, the level from which it leaves the palm, has particular significance. A low set occurs when the crease line between middle and basal phalange is about level with the crease where the ring finger extends from the palm.

People with low set baby fingers often experienced having had an emotionally absent father, with accompanying deficit of father function as a prevalent life theme. This translates to their having lacked paternal validation, provision, recognition, protection, guidance, boundaries and discipline. Note that this doesn’t mean that owners don’t share a deep love with their father, but that during their formative years, their father was in some way absent, effecting in their psyche low self esteem, sexual self-doubt and difficulty in trusting intimate relationships.

The flip side of this less than positive marker can aspect a kind person who is a good teacher of young children. Interestingly, low set air fingers are often found on people who find within themselves the motivation to work deeply on their chosen study, ultimately to have their talents recognized. Their success in life comes ‘in spite of’ their not having had optimal parenting.

Widely spaced baby fingers that jut out sideways from the hands signal the candid, talkative, unconventional, independent thinker, who must have freedom and independence of action. They feel hemmed in and trapped if restricted and might easily become claustrophobic. Baby fingers that are very wide spaced often reveal deep inner loneliness or even reclusiveness. Baby fingers that cling tightly to their neighbouring fire (ring) fingers signal the person needs to be in relationship -they are not so happy alone.

These are just a few of the variables, which when subjected to codification and interpretation, reveal accurate information about the person.