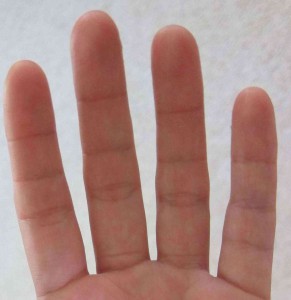 As I mentioned before, it’s our littlest finger, but in hand reading it offers the biggest story. Pinkies govern communication, financial exchange, business acumen and sexuality, as well as often being key markers of a person’s sense of self-worth.

In handreading, it is said that ‘fingers are best worn straight’. Unfortunately for owners, very bent baby fingers are said to shows traits of dishonesty, fondness for intrigue, and sexual ‘kinks’, fetishes, ‘perversions’. In fact, I was taught by my first palmistry teacher ‘don’t trust anyone with a twisted pinkie’, as they ‘manipulate communication channels for vested interests’.

I have since learned to refrain from assuming these negative meanings too hastily, not least of all because bent fingers might be inherited, in that one or both parents will have similar fingers. We readers are ourselves obliged to navigate very tactfully with our spoken words with this person. The very tact that is evidenced in the ‘good bedside manner’ type of pinkie, i.e. where just the tip is slightly bent, is the quality most needed in a reader to convey to the owner the more redeemed aspects of their traits.

Gentle enquiry and dialogue with the owner of bent pinkies would likely reveal a background that veered strongly away from the norm, and that they have suffered at the hands of others. While evasiveness is a survival strategy, they themselves are astute, and not easily deceived. In a reading we could discuss any hidden trend in them to distort truth in communication, especially subjectively, within themselves.

Very occasionally people have pinkies that bend outward, away from their ring fingers. This shows friendliness, but the owner has known abandonment, and fears emotional intimacy, whereas people with pinkies held closely to their fire (ring) fingers like to be in a relationship. Baby fingers that are wide spaced generally shows a candid communicator and free thinker, who needs freedom and independence.

The scientific term for a sideways curve to a finger is clinotactyly. Bent baby fingers are medically associated with many medical syndromes and congenital abnormalities. Meanings for sideways bends are very different from the less commonly found finger that can’t straighten, that remain in permanent fixed flexion, curved towards the palm. Clinically, this is called camptodactyly, and might be seen to show inflexible rigidity and self-centeredness in a person.

Sometimes an extra bar line, resembling an interphalangeal crease, runs across a phalange. It looks like there are four phalanges, while there remain three bones. This adds a persuasive dimension to the person’s communication, and sexiness, or perhaps the bar might show the opposite, sexual inhibition, depending on the set of the finger and the rest of the hand. I’ve also seen several (bent) pinkies with only two phalangeal bones which highlighted sex and communication issues in the owners.
The size of the finger tips relates to the ideological realms, of concept, thought, intellect and meaning. Long, large air finger tips show that security is found within thinking. The owner has love of knowledge, education and intellectual pursuits. Short, small tips show less concern with analysis. A very small basal phalange looks childlike, suggesting inhibition of sensual fulfilment, some kind of challenge or block re even thinking about intimacy, accompanied by deep seated doubt of their desirability.

There are several other variables of each individual phalange ratio from those I have mentioned. And there are many other variations of baby fingers, not to mention variety of gestures. Who doesn’t know about the slightly prudish, fastidious trait in the person whose baby finger stands up-straight to attention as they hold their tea cup? We’d ask – how thick, thin, smooth or knotty or flexible? What tip shape, fingerprint glyph, nail, and does the person wears a pinkie ring? Subconsciously we are aware that that pinkie rings are linked to money and sexuality. Nonetheless, conscious placement of a baby finger ring could be helpful for improving communication.