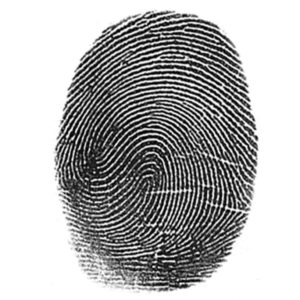 Composite glyphs are composed of combinations of two main glyphs. In all of humanity, there exist only two composite glyph patterns, double loops, and peacock’s eyes. Double loops are identified by two small triradii which support a yin yang pattern that is composed of two intertwining loops.

The universal yin yang symbol teaches that everything has an opposite polarity, and that there are always two sides to a situation. Double loops on a set of hands reveal the owner to be diplomatic, yet also willing to play the “Devil’s Advocate”. They dislike bias and have a developed sense of what is fair and just.

Composed of pure water, this evocative glyph pattern magnifies sensitivity, intuition and psychic ability in a person. Double loops show up on the hands of dowsers and psychics.

The rise and subsequent descent of the ridge flow resembles a wave that swells up, and then crashes down. The owner might have some rough rides on an emotional roller coaster, perhaps wavering moodily between confidence and self-doubt. Or they can’t easily can’t make up their minds and are given to the “will I, won’t I, can I, can’t I, should I or shouldn’t I” type of indecision.

Water governed markers in hands always point to idealism and the longing to improve, but also to how easy it is for idealists to become depressed and want to avoid or to escape.

In traditional Indian palmistry this composite pattern is called Shakti.