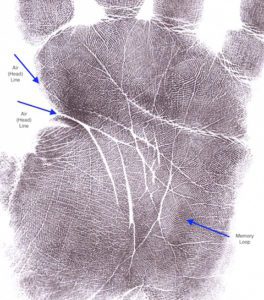 Air lines, otherwise known as ‘head’ lines in palmistry, represent the quality of our mental life. Their forms and flows describe orientations of consciousness, our minds, and our style of thinking about, understanding and receiving information. Head lines are all about brain energy and cognition.

The seldom found dramatic doubling of air lines shows two concurrent thought processes. This for the owner could be crazy making. They think and function on two levels simultaneously. While having two head lines is a definitive stamp of a highly intelligent and mentally dexterous person, they may be torn in two directions, or find it hard to focus. The minds of people with two head lines are like heavily wired circuit boards, which without clear expression, could blow. 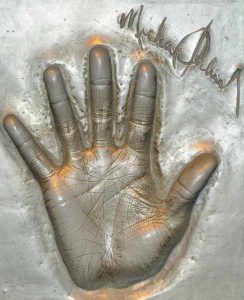 lines might aspect a person who is charismatic, charming and persuasive and who is recognized for their talents. But simultaneously, they are compelled to mastermind their own undoing with self-destructive behavior. This image is the cast hand of Michael Jackson, owner of a double air line, which also played out in the polarity of his private vs exhibitionistic sides.

The famous Irish palmist Cheiro, aka William John Warner / Count Louis Hamon, had a ‘double line of head’. He wrote:

“A double line of head is very rarely found, but when found it is a sure sign of brain power and mentality. Such people have a perfectly double nature — one side sensitive and gentle, the other confident, cold, and cruel. They have enormous versatility, great command of language, a peculiar power of playing and toying with human nature, and generally great will and determination.”

Air lines begin on the thumb sides of hands, between the Jupiter and Mars lower mounts, in one of several ways: tied to the earth (life) line, separate from the earth line or slightly under the earth line, and run towards any of several variables of endings. Each variation of the origin of the line has its own relevance and interpretation, as does each variation of length, flow formation (such as straight, curved, islanded and so on) and end point, and each of these variables are a topic in themselves.