A whorl rests upon the Moon mount. This pattern is also known as the “hypothenar whorl”. 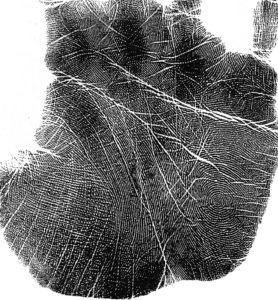 Whorl on a Moon Mount

Whorls are also called “chakras.” Whorl dermatoglyphics are formed from concentric or spiraling skin ridges. Two triradii support, one on either side.

“The tree that stands in the desert” is a metaphor for the psychological profile of those with whorls in their palms. This unusual pattern on a hand is unique gift; one that begs their owner’s understanding.

In my book about fingerprints – “God Given Glyphs” – I wrote: “This marking signals a most unusual individualist, a person of absolute singularity.”

Whorls, in chirology’s 5 element system of how to read hands, are governed by air, and Moon mounts by water. In this context, air tries to escape water, to be free from emotional realms. Therefore, we understand that the bearer of a whorl on the mount of the Moon will have strongly autonomous and independent traits.

A whorl in this position activates a strong need for self reliance; they baulk at externally imposed regulations and restrictions, and prefer self-employment, or at least need to be left alone and unsupervised in their work environment.

Added air energy shows up in varying degrees of emotional unavailability. Intimacy may be challenging; owners tend to close off the deepest parts of themselves. (If their air fingers also jut out from the sides of their hand, this trait of detachment exaggerates).

Generally, people with whorls are good communicators, but a whorl on a Moon mount signals an essentially private person, who needs alone time. As children, they may have been loners with a sense of un-belonging.

The vortex like appearance of their pattern can be seen as a portal to original creative ideas. The owner of this glyph has a vivid imagination. In all likelihood, the owner is skilled or specialized, probably in art and craft, acting, teaching and service professions.

Whorls add a broad dimension to perception; the bird up in the air’s eye view, so to speak. Owners are observant and perceptive; they see the bigger picture. Their orientation in life is both objectively and subjectively conceptual, expansive and enquiring.

In chirology, we understand that Moon mount whorl bearers have acute awareness of the forces of the unconscious. They may be psychic, or given to prophesy. This glyph might be found in the hand of a spiritual teacher.