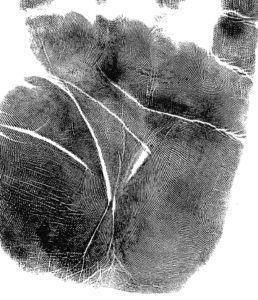 There is a saying in hand reading – ‘the cleaner the hand, the calmer the mind.” Generally speaking, having very few lines in your palms might be an advantage in life, as palms which are empty of other lines besides their main lines show less psychological complexity in the person.

This illustration shows three main lines, with a section of a minor earth (fate) line, and an earth mount crease. The earth or Venus mount crease is the deep horizontal line on the Venus mount, which adds earthy traits of loyalty and honesty.

In “empty” hands, the earth element’s basic practicality comes to the fore in the person’s temperament. Earth in nature doesn’t move unless it is moved, meaning that people with very few lines often have relatively calm nervous systems and are disinclined to self-analyze. They are less likely to be open to mental and emotional excavation.

These are the practical, non-reflective types who don’t spend much time in self-enquiry and who simply prefer to get on with life. Their emotions may be blocked or hidden or avoided even by themselves, so a deeply private inner stress, that they themselves may not realize they have, is possible.