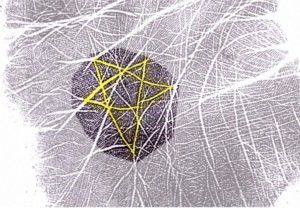 Over the years I’ve received a steady stream of inquiries about meanings for the rarely detected and alluring manifestation of a 5 pointed pentagram or pentacle pattern lying within the constellation of lines.

Many who have asked for my take have, based on their personal subjective experience, psychology and beliefs, their own specific very personal version of what their pentagram symbol means for them.

But how do hand readers look at this coincidental convergence of lines? For some, yes, it’s a pictorial symbol, interesting, but completely meaningless. For other intuitively orientated like myself, there is more to this 5 pointed star than just meets the eye.

Psychic palm readers may feel invited to ascribe and to discuss possible meanings for the esoteric symbol in the person’s hand. Readers who sense through right-brained, divergent lens of perception may feel an invitation from source to receive a download of information. The 5 pointed pentagram pattern is like an interstellar stargate through which to “travel”; it triggers images, metaphors, colours, sensations and impressions.

Amongst many symbolic associations, pentagrams in ancient times were symbols for the 5 senses and the 5 natural elements earth, water, fire, air and ether. In medieval Arab and Jewish occultism, the “pentangle of Solomon” is a talisman that has power of exorcising demons. Pentagrams are linked to love; the pentagram of Venus is the path pattern of the planet Venus as she orbits through the heavens. In modern Western culture, they are symbols of fame or “stardom”.

In hands, they might be seen as a sign of a spiritual initiate who enjoys deep intimacy with God consciousness and who has affinity with nature and the 4 elements of matter; earth, water, fire and air.

Traditionally, a pentagram in a hand is essentially a “good” and auspicious sign of wisdom; the person can thank their lucky star. Pentagram symbols in right hands of right-handed people are said to signify spirituality, healing knowledge, and service to others. In another dimension, it is conceivable that the person is an advanced psychic, who is an adept in mystical schools of study.

Research reveals that negative meanings have been ascribed to pentagrams on left hand palms, especially if one point faces downwards, like Satan’s emblem, which suggests that in another life, the owner is a sorcerer-type, who messes with people’s energies.

But one point upwards in a left palm might aspect a natural Merlin who uses his magical skills in positive ways. Depending as always on all other hand features, the person might function with crystal clarity, and be proficient in harnessing and governing their emotions.

The pentacles suite in tarot relates to money, so a pentagram in a palm might alert a reader to finances being a key theme for the client.

In my 5th book, “Palmistry Signs & Symbols on the Mounts”, I’ve shared images and more specific meanings for pentagrams in the 4 positions I’ve observed them; on the Plain of Mars, on upper Venus, on lower Mars and on Sun mounts. See my books HERE

* A well-formed 6 pointed hexagram would be an exceptionally rare find.

* Pentagrams are different from stars.