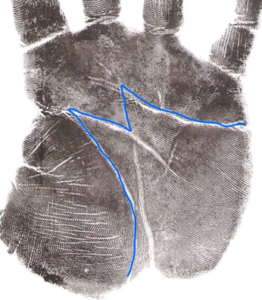 Today’s post is about luck, and the ‘Magic M’. I’ve been researching the concept of “luck” in our hands, and posing the questions: “What is luck?”, “Do you believe in luck?”, and, if you are a reader, “Do you speak to your clients of ‘luck’?

In traditional palmistry, there are markings that relate to luck. The first marker that I’ll talk about today is the so called “Lucky M”, also known as the “Magic M’.

The “M” is formed by the combination of the Life, Fate, Head and Heart lines. Not many of us have a clear “M”, it is relatively uncommon. For an “M” to be well formed in your palms, these criteria must be met.

A ‘Lucky M’, or ‘Magic M’ is believed to be a very positive indicator in a hand. An ‘M’ is associated with very good fortune in life, along with several traits, blessings and gifts, many of which begin with the letter M.

Money. An “M” is well-aspected for wealth and financial success. Prospects for their career is positive.

Motivation. Owners will have a steady supply of self-discipline.

Management. This primarily refers to self-Management, as well as to leadership abilities.

Mastery. The concept is here is self-mastery in this lifetime. Owners of well-formed “M’s” are strong and stable within themselves. Linked here is the likelihood of their having well developed intuition, which reduces room for error in business and relationships.  People with an “M” are supposedly good judges of character, who can sense and hidden agendas in others behaviour.

Marriage. My first teacher, a traditional palmist, taught me that an “M” in a hand increases the likelihood of the owner having a happy marriage.

Mysticism. The “M” also relates to spiritual progression. Owners align with and cultivate their spiritual lives.      Perhaps this is also why the “M” has also been called the “Mark of the Mother Goddess”.

Magic. Another concept strongly associated with this marker. The owner might be a Master of Manifestation. They also are sleuths who like to solve Mysteries.

Why it is that some people consider themselves lucky, while others feel unlucky? Some say that luck is a genuine feature of existence. Others say that no-one has luck. One thing is clear – ‘luck’ is about perspective. For example, after an accident, we “are lucky to be alive”. But some people really do seem to be very lucky, or very unlucky.