Named after the wise Biblical king, this power marker is said to signify wisdom and knowledge; the owner might be a spiritual initiate, a person of a higher harmonic who cultivates their relationship with Higher Power.

Believed also to aspect the ability in the owner to impart wisdom acquired through many lifetimes, this feature is found in the hands of people in professions of authority and leadership that require skilled communication and applied discernment, such as judges, lawyers, nurses, teachers, trainers, psychologists and counsellors.

Considered in palm reading to be one of the most auspicious of the palmar markings, Rings of Solomon have many other rich interpretations. Owners will be respected, and are generous and benevolent. With their high spiritual IQ’s, they see beyond the superficial, and are insightful and intuitive. They comprehend and have a feel for mystical realms. They are philosophically inclined, intelligent, and love to learn. 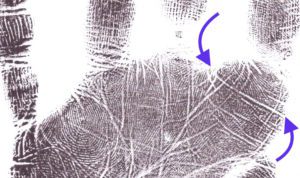 In palmistry, we make a distinction between curved rings of Solomon and the far more commonly found straight lines that cut diagonally across Jupiter mounts.

You won’t find mention of these these relative newcomers to palmistic consciousness in old palmistry books; they are called Sympathy Lines.

As opposed to the intuitive and emotional wisdom associated with the curved formation, straight Sympathy lines are said to aspect a logical approach to wisdom.

But meanings for straight Sympathy lines are similar to those of the curved version, in that owners are said to be empathic and compassionate; they have psychological insight and understand the psyche of others. They might also aspect humanitarian traits in a person who helps relieve suffering.

Rings of Solomon and Sympathy lines are often doubled, or show partially, in sections of several lines.

As with all hand features, we avoid interpretations for lineal markings on Jupiter in isolation; they must be read together with the rest of the hands, for example, what does the form and flow of the air (head) line reveal about the person’s thinking?

The formation of the water (heart) line has special relevance: does it end in a fork that conjuncts with the Ring of Solomon? If so, idealism is added, and the ring’s most exalted meanings are magnified.

The size and texture of the pads of flesh under the base of the person’s index fingers also influence our interpretations. Jupiter stands for possibility, expansion, capacity for outreach, broader purpose, exposure, recognition and luck.

Both the mounts and fingers above associate with qualities of ambition, achievement, personal authority, leadership and personal beliefs. This underlying mount’s size and quality ought to be considered when interpreting Rings of Solomon.

Known in the 5 element system of interpreting hands as the “finger of personal identity”, the shapes and sizes of our index fingers relate to self-esteem, sense of authority, power, ego and leadership.