Minor Earth (Fate) Lines begin from various starting points in the lower palms and run upwards towards earth fingers. In palmistry, this is the highly significant fate (Saturn/destiny/career) line. As secondary earth lines, minor earth lines relate to our internal stability and how we balance our subjective needs with life’s external duties and obligations. Minor earth lines are important in that they represent our life’s work and how we deal with responsibility and the demands of society. In their divisive position at the centre of our palms, they are like a filter between our inner thoughts and feelings and our outer application and function.

When well-formed, they aspect strength of character, directive and balance between subjective and objective awareness. Conceivably, the deeper and clearer their minor earth lines, the more disciplined the person. This marker might belong to someone who stays in one job and is committed to their karmic life path. In the element system, the presence of this earth-governed line in a person’s hands implies innate constancy and a work ethic which lasts to the end.

The Greek name for Saturn is Chronos, Old Father Time himself. This is the root of the word ‘chronology’. In addition to their other associated meanings, minor earth lines symbolize time. For those readers who are especially gifted with intuitive perception, this is the most reliable line to read chronologically. 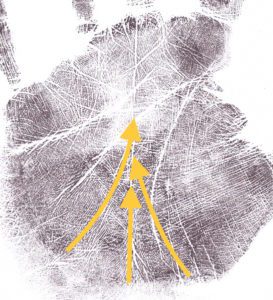 Minor earth lines have three basic points of commencement. When they begin inside or are tied to main earth lines, the influence of earthy principles and qualities in the person’s life and career path are significantly increased. Family matters and innate societal conformism are accented for the owner of this feature, who is home-loving and has the need to belong. Perhaps they work in a family business or receive financial support from their parents. They may have sacrificed their own needs and preferences out of allegiance, or to receive approval from their family. Their work ethic is likely to be strong, warm-hearted, determined and enduring.

Minor earth lines which begin in the centre of the hands at the base of the wrists suggest a good balance between responsibility (earth) and imagination (water). This feature can denote a career that begins early in life and which is chosen independently from family approval.

Meanings for minor earth lines that originate from Moon or Pluto mounts are influenced by the water element. Water is cohesive and wants to join and connect, so people with this feature experience easy social flow and have comfortable platonic relationships with the opposite sex. Water’s adaptability suggests that people with this form of minor earth line are able to get along well with others and that they do well in careers where they are required to relate to many people. They are more influenced by their peers than by their families or their background. It is likely that creative use of their imagination is required in their chosen careers. If the line originates higher up from the upper Mars/Uranus mount (on the ulnar side, above the Moon mount) the person’s career will be unusual, perhaps a special vocation or calling.

The absence of the minor earth’s beginning section often shows the ‘late developer’, whose early working years were varied and flexible. They may have had a rootless childhood filled with adverse conditions. Their sense of identity within the family is in deficit, and their personal identity and career direction develop late.